When I was at San Jose State it was a real treat to visit the Coastside. For one thing I’d be coming from a very hot place to a very cool one. I’d see the first signs of fog either at the top of Highway 92 (Skyline) or further west by Curly & Red’s automotive shop.

Curly and Red were both alive when I first moved here, and, Curly had curly hair and Red had red hair. What else did you expect? Their shop was on Highway 92.

Closeby were some greenhouses and the folks would dump the plants that didn’t make it near the road. When I discovered it I started going to the plant dump regularly rescuing borderline plants. I had a homemade dome shaped plastic greenhouse in the garden and that’s where I put my collection of ailing ferns and flowers.

At San Jose State I lived in a big old house poised along the Guadalupe River–this was before the major freeway project began so it was pristine. Several of us at the house, with gardens dancing in our brains, decided to spread lawn seed and plant flowers along the bank of the creek. We wanted a special, private and beautiful place to visit.

Main Street Half Moon Bay wasn’t anything like it is today. I’d have to say it was much more authentic in the 1970s, a place still truly cut off from the City and the Peninsula. The oldtimers were still around, the Portuguese wearing their hats sat on benches under the fog. Just outside of town on Highway 1 an elderly fellow sat on a chair watching the traffic, of which there wasn’t much.

It’s hard to believe now, what with all the traffic and the sirens breaking the silence everyday, but when I first moved here there was none of the above. The road that led off Highway 1 to my house in El Granada was dirt. When I first saw that dirt road steps away from the Pacific Ocean I asked myself ‘how could this be?’ It was so rural and yet we were thirty minutes from the big City to the north (separated by Devil’s Slide, I shouldn’t forget to add).

I should have known it was all on the edge of extinction. That a dirt road off Highwy 1 into El Granada couldn’t last for long.

I took lots of walks from El Granada–crossing Highway 1 that was completely car-less to the beach–heading north along Surfer’s Beach, the beach at Princeton, the shore of which was littered with tiny shells, through the fishing village where a lot of folks lived in battered volkswagon buses and nobody bothered them.

Half Moon Bay was the most idyllic place for a kid originally from San Francisco’s Sunset District. 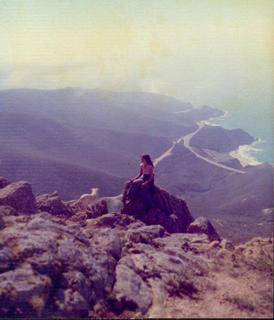 (Above, me, and beloved dog, Scorpio, at the top of Montara Mountain, looking south toward Montara and Moss Beach. 1970s. What a view!)

At the moment I’m at home on the Coastside enjoying the fog…(earlier today I had to drive on an errand to Mtn View and at 10 am it was broiling; I don’t like heat.

I told you I grew up in the Sunset District where it was never sunny and I grew up to love and need fog. Actually I like all kinds of weather but I favor fog because its so emotional, kind of depressing. Most people, the vast, vast majority, love blue and yellow all the time, I like variety.

The nice young clerk at Kibbles and Clips in Half Moon Bay told me when I said it had been sunny too long and I wanted fog, “Spoken like a true Coastsider”. She didn’t know how well I knew fog. I like it best when I can’t see the house across the street.

I first started visiting the Coastside while going to San Jose State. I was also living in San Jose, even during the sweltering hot summers when most students headed for the cooler nights at Lake Tahoe.

The new friends I made at San Jose State came from the Menlo Park-Atherton area and they knew and loved the redwoods of La Honda and the lonely, foggy Coastside beaches. That’s how I got to know both, through them.

One good friend, John, my future ex-husband, worked at Memorial Park during the summer, cleaning bathrooms, etc. Occasionally we camped out at the park, walked the scented trails, listened to the trickling creeks and swam in the “swimming hole”. David Cline was the gorgeous lifeguard over several seasons, a contemporary of mine, who bought a quaint summer house off isolated Tunitas Creek Road, had some sort of business relationship with Neil Young and later became a very successful Coastside realtor.

Around the time David was a lifegaurd or shortly thereafter– when the street outside our Coastside house was a pot-holed dirt road, not paved as it is today– a big bus pulled up in front. It was dark outside, there were no street lights then. I’m talking about a big bus, not the boss-man’s bus, but the kind that takes the rock star’s crew on tour. Tonight it was empty except for David who was at the wheel. He was laughing when the bus door opened with a “whoosh” and he stepped out.

Looking back, it was a little moment but at the time it felt very big. I never visited the Coastside while I was growing up in San Francisco. I didn’t even know it was there.

What I tell people is that one of the things I learned in school was to move to Marin County. Even now it seems as if all my classmates at Lincoln High School live somewhere on the north side of the Golden Gate Bridge. Sausalito was a big attraction; there wasn’t much else over there then. I took swimming lessons in Terra Linda and rode on the Greyhound bus there over a little dusty highway. The driver actually stopped on the highway and I walked across the road and the mile or so to the swimming school.

During the summer my parents took regular outings to Searsville Lake, a wonderful place for a kid to swim. There were small floating rafts to hang onto and a big one that held a dozen swimmers or so.

My dad would drive south from San Francisco along bucolic Canada Road and we’d make the mandatory stop at the Pulgas water temple. We’d get out of the car and I’d run over to the “water temple” and stare down to watch the water flush like in a big giant toilet, or that’s what the kid-part of me remembers.

Later I heard the temple had been dedicated (was it in the 1930s?) to an artist called George Sterling, a poet whose least favorite drink was water.

To get to Searsville Lake you had to drive through a dark, woodsy part of Woodside. For some reason my father always got stumped there and we took a few wrong turns before we entered a clearing that led to the lake’s parking area. The weather was always roasting hot, there were bees, picnic tables and small boats to rent.

We never went to Half Moon Bay. I’m sure if I looked to the west I would have seen a thick cover of fog. One HMB oldtimer who was born in the 1880s told me she couldn’t remember when the Coastside wasn’t foggy. Having grown up in San Francisco’s Sunset District–which was anything but sunny–I was accustomed to the fog, and you know what? I liked it.