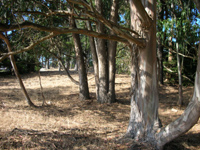 When Westinghouse and the developers Deane and Deane were trying to promote the Coastside they put out a little pamphlet which I will quote from later and they produced a calendar in an attempt to dispell the rumor that this part of the county was always foggy.

The calendar featured a little yellow sun above the dates of the month when it wasn’t foggy.

As I said before, when I first moved to Half Moon Bay, actually El Granada, “the banana belt” which is four miles north of the town, it was foggy all summer long, all three months until “Indian Summer” heated us up in September. Folks I knew called El Granada, “El Gray” and when even the fog-hardened locals had had enough they drove “over the hill” to sun-drenched San Mateo. From Highway 92 you could look west and see the fog caressing Half Moon Bay. Hardly anybody wanted to go over there.

Of course, when it was sunny the Coastside was (and is) the most beautiful place to be and so card-carrying locals felt they had to feed the rumor that it was more often foggy here than not. In fact, this is the first almost foggy summer I’ve experienced in quite a while.