Special thanks to John Vonderlin ([email protected]) for the following post.

From: Coast Dairies Property: A Land Use History, click here

“The Davenport cement plant (it became Pacific Cement and Aggregates in 1956, Lonestar Cement Corporation in 1965 and RMC Pacific Materials in 1988), brought immediate military attention to the North Coast following the attack on Pearl Harbor in December 1941. Believing that Japan might attack the U.S. mainland, the military quickly posted guards and lookouts around Davenport and imposed stringent blackout requirements on its residents.

“Later in December, when the ship Agiworld was attacked by a Japanese submarine off Cypress Point south of Monterey, security along the coast was heightened. A Japanese submarine was also sighted off the coast a few miles north of Davenport, resulting in a brief skirmish between the submarine and a single plane from the Army Air Corps.

“Eventually a segment of the all-black 54th Coast Artillery was stationed at Davenport and regular night canine patrols were instituted at all the area beaches. In addition, four shore mounted guns were placed strategically around the Cement Plant. Two 75mm guns were mounted overlooking the pier and two 155mm Howitzers were mounted just to the east of Newtown. Many of the young people living in the area at the time became airplane spotters, spending long hours in the lookout stations posted along the coastal hills.”

My Dad, Robert (Bob) Ballard was born in Pescadero along with 11 other brothers and sisters….he took me to the tunnels on several occasions and told me that they were used to store guns and ammunition during the war. He helped ‘build’ them. I do not recall where the others were although I do remember that they were mostly on the water’s edge, but there were tunnels and observations points high above Gazos Creek…there was a military facility there too. That, my husband and I discovered in the early ’60’s that there is (or was ) a missile base in the Santa Cruz Mountains…we found it by accident while on a Sunday drive with our first child…Dad had a lot of memorabilia that he received from the military personnel stationed in the Pescadero area…When the troops left the area (I was very young at the time..(born 6/6/42)…they left a Springer Spaniel dog behind…he became my pet…Billy.

Peering into a South Coast tunnel, photo by John Vonderlin When I first landed on the Coastside, and became intrigued with local history, I met with Louie Miguel, whose father, Joseph, was one of the masterminds behind the spectacular Palace Miramar Hotel. Louie offered good background info and also talked about the US military taking over his father’s buildings during WWII.

[The military moved into many of the Coastside’s public buildings, and most certainly, those located on the beach side of the highway, as the Palace was.]

The former Camp Miramar was established on 21 April 1943 when the U.S. Army entered into leases with several land owners in order to provide for a camp to house infantry units assigned to the Western Defense Command. The 1 June 1943 edition of the Station List of the Army of the United States, issued by the Adjutant General of the U.S. Army, stated that a single rifle company, Company G of the 125th Infantry Regiment, was present at Camp Miramar.

At the time of acquisition, there were two major buildings that the U.S. Army took control of. The first was the Miramar School, a small elementary school that served the local faming community and located on the eastern parcel, between State Highway 1 and Valencia Street. The other major building was the Palace Miramar Hotel and Resort, a large redwood-shingled building located on the beach in the western parcel of the Site.

To these substantial buildings, the U.S. Army added several temporary barracks, mess halls and support buildings. These were of the Civilian Conservation Corps (CCC) design developed by the U.S. Army Quartermaster Corps in the late 1930’s. These prefabricated, wood framed buildings could be assembled in as little as three hours by joining components with lag screws. Creosote soaked posts served as the foundation for these buildings. With the CCC buildings included, the post had a capacity to house 495 soldiers.

Palace Miramar Hotel and Beach Resort in the 1920’s (www.halfmoonbaymemories.com).

In a letter to the Adjutant General, U.S. Army; dated 23 January 1944, the Western Defense Command identified the Site as vacant and excess to its needs. On 11 May 1944, Office of the Chief of Engineers at the War Department approved a request from the Bureau of Yards and Docks of the Navy Department for the six of the barracks and one on the latrine buildings. This transfer of the buildings to the Point Montera Anti-Aircraft Training Center was made without the U.S. Navy becoming responsible for restoration the land on which the buildings were situated. 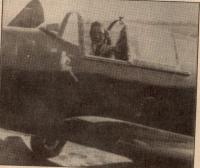 She flew the PQ14 out of a military airstrip in Moss Beach. Her scarey assignment three years after Pearl Harbor, she told me, “was supposed to be very hush-hush�?. What she did was tow targets behind the plane and military gunners on the ground practiced shooting at them— pretty dangerous if they missed as stray bullets could do damage to both civilians and Shirley herself– which was why the training occurred on the remote Coastside.

But when Shirley came back to Moss Beach almost 50 years later she said she couldn’t find anything she recognized.

The memories hid from her because the Coastside had grown up ,and the reminders swept away since the summer of 1944—when Shirley, a 5’11�? former Pan American Airways secretary– decided to turn in her manual typewriter and learn how to fly during WWII.

Moss Beach was in the countryside but even more remote than Shirley Thackara expected. When she saw her new home, an abandoned farmhouse with curtainless windows, her response was “….it was so awful, it was funny. Everything in dark wood, showing signs of once having been a bird house, three rooms, kitchen with nothing but a sink—and absolutely no furniture except three Army cots.�?

Parked outside what she dubbed “the fishing shack�? was Shirley’s 1941 Mercury convertible. She recalled driving along the cliffs to Half Moon Bay, but she couldn’t find the road in 1993. The “fishing shack�? was gone, the military strip wasn’t where she remembered it and even the road she had traveled had disappeared.